P
Patricia
Shout out
Christmas
Wish he had personized as if message from him not just read my note. Also not fully in picture frame,…
Dec 2021
C
Colin
Shout out
Wedding
Great Video, thank you very much
Jun 2021
Cancel

P
Patricia
Shout out
Christmas
Wish he had personized as if message from him not just read my note. Also not fully in picture frame,…
Dec 2021
C
Colin
Shout out
Wedding
Great Video, thank you very much
Jun 2021

Anyone watching English football in the nineties and noughties will know the name Dean Windass. The lad from Hull made quite a name for himself in the English football league over his exciting career in professional football. Dean Windass' date of birth was the 1st April 1969, making him 52 years old at the time of writing. So, what's he accomplished over those years?

Kicking Off at Hull City

Dean found himself entering professional league football for Hull City at the age of 21, after just one season with the North Lincolnshire, semi-professional club North Ferriby United. Since then, he's gone on to become a definitive Hull City player, and one of the fan's favourites.

One of the finest moments of Dead Windass' career came in 2008 when he scored the only goal of the Championship play-off final to secure his hometown team's promotion. The fact that Dean Windass earned Hull City promotion without even a league victory is quite the romantic story for the fans, and one that he'll remember for the rest of his life. According to some records, this goal earned the club £60 million in Premier League television rights.

To date, Dean Windass finds himself in the 10th position of the club's goal scoring charts. Quite a stat for a man who spent half of his career at other clubs!

After Windass left Hull City (much to the dismay of the fans), he had a brief yet exciting stint in Scottish football for Aberdeen. It was here that he picked up quite the accolade: three red cards in a single league game (the last of which was for stealing the corner flag!). As you might have expected, this resulted in a six match ban, and was perhaps the beginning of the end for his time in Scottish football. Dean's stint in Scottish football came to an end in 1998 when he moved back to England, signing a contract for Oxford United. He played there for a season, but with the club unable to avoid relegation, he decided to sign up for Bradford City AFC.

One of the most successful parts of Dean's career was at Bradford City. Former manager Paul Jewell took him on board for a cost of £950,000 and the side was instantly reimbursed as Dean helped Bradford City runner up Division 1.

Paul Jewell left City not long after this, but this didn't have an impact on Windass' form. In the following season, Windass was ornamental in City's successful battle against relegation from the league. At the time, he was the best player in City's team.

Windass' appearances flipped between midfielder and striker for the club, but overall, he was more of an out-and-out goalscorer and preferred to be up front as much as he could.

In Between the Premier League

Dean spent a fairly quiet couple of years at Middlesborough before joining Sheffield Wednesday on a loan spell, closely followed by a second loan spell with their rivals Sheffield United. The latter resulted in a permanent signing, albeit a brief one. At this time, not many wanted to sign Windass due to his bad-boy persona, although one club that certainly did was a place he had already been...

A Second Stint at Bradford City

Dean returned to his former club, Bradford City, in 2003, much to the joy of the fans. It was no wonder a second Bradford City contract was on the cards considering his huge success at the club previously.

However, this time around things went even better for the man. He scored 60 goals there in four seasons, making it one of his best stints for any professional clubs in his career. In his first season, Bradford City matched their league position finish from the previous, 13th place.

Dean played on for Bradford, but not without controversy. He was accused of grabbing an opposition player by the testicles, yet never truly convicted of the crime. Unfortunately, the opposition player that Dean did supposedly grab was actually sent off for hitting Windass.

To this date, Dean Windass is the club's third highest scorer of all time, with a total of 76 goals to his name.

Returning to Hull City and the Later Years

It was only a matter of time before Dean Windass went back to his hometown club Hull City. However, he did take his time about it. Just when people thought his career was coming to an end, he re-entered the KC stadium and played football just as good as he ever had done, giving Hull City everything they wanted.

Windass joined Hull on loan from Bradford before the clubs entered protracted negotiations and the deal was done permanently. However, in his absence, Bradford City was instantly relegated. It was necessary, unfortunately, as the money Hull paid for this loan deal allowed Bradford City chairman Julian Rhodes to pay urgent bills for the club.

Windass remained at Hull City for two seasons, netting 12 more goals for them. It was in a Premier League game that Dean Windass scored his last goal for the club. Furthermore, in 2007, Windass scored the winner against Cardiff City, a goal that secured virtually certain Championship survival for the club.

The End of Hull City

Things didn't go so well towards the end of Dead Windass' time at Hull. He got into a fight with a fellow player, Marlow King, at a casino on 12th November 2008, before scoring his last (controversial) goal for the club 10 days later.

In the next Premier League match, Dean was booked without even coming onto the pitch for "unsportsmanlike conduct" as he warmed up too near to an opposition player.

He made his final Premier League showing for the team in a 5-1 loss to Manchester City in December. During this game, the side received their halftime team talk on the pitch itself, to the surprise of the fans.

After Hull, Dean played for Oldham for nine games. During one of these, the football league one's goalkeeper was sent off, and Dean himself had to stand between the sticks for the first time in his career. In his first game for the club, Windass hit the crossbar!

In 2009, Dean briefly retired, then came out of retirement to play as a player coach for Darlington for just nine league games. He then had spells at Barton Town Old Boys and onto Scarborough Athletic on a game-by-game deal. After this, Dean continued in the domestic league territory, except this time in the East Riding League for AFC Walkington.

In 2020, Hull City council awarded Dean a position on his hometown Hull City hall of fame, cementing his position as a definitive Hull City player and a real club ambassador. After giving hometown club promotion and scoring so many goals for them, this was written.

In 2009, with Windass' playing career over, he secured football coaching licences and applied for a vacant manager's position at Grimsby Town. A club facing relegation, this was always going to be a tough ask, but unfortunately, he was unsuccessful in the application.

Windass applied for a vacant manager's job at Shrewsbury and was turned down again here, then one more time for Hull City, before he eventually settled for a role at East Hull.

Dean Windass has never been just a footballer. There's a lot more to his life than meets the eye and he struggled with mental health significantly later in life. However, he bounced back, and he thanks a combination of fitness and diet regimes with CBD oil for this. Dean Windass' wife, police officer Helen, was a huge support in his recovery. Long live Dean Windass!…

Anyone watching English football in the nineties and noughties will know the name Dean Windass. The lad from Hull made quite a name for himself in the English football league over his exciting career in professional football. Dean Windass' date of birth was the 1st April 1969, making him 52 years old… 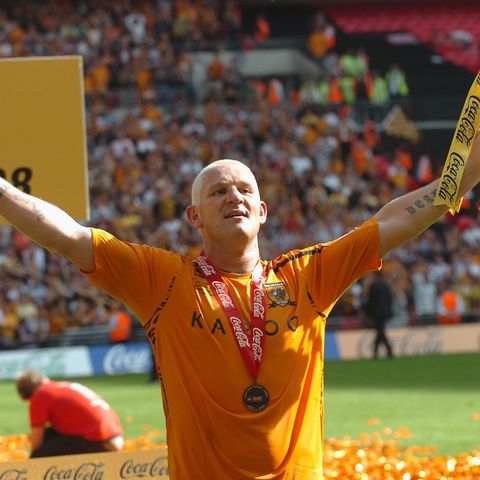