Shout out package
Book me for a personalised video message for any occasion for you or a loved one
Consumer£300
Business£5000
Performance package
Book here for a longer video from me. Business/Branding requests are at a higher price point.
Consumer£325
Business£5000
1 Hour Virtual Experience 🥳
Book a 1-hour virtual meet and greet with me!
Consumer£5000
Business£15000
Book Now

Hollywood star and American actor, Gary Busey, is best known for his portrayal of the titular character in The Buddy Holly Story (1978), Lethal Weapon (1987) and Point Break (1991). Gary Busey is considered somewhat of a legend, having over 100 credits in film and TV. He's been described as an "odd and fickle character", yet his epic filmography tells a thousand words. One of Gary's characteristics is his benevolent nature, along with his funny mannerisms and absurd catchphrases like "beating around the bushing", which is now coined as "Buseyism". In the more than four decades since his career began, Gary Busey has garnered quite a bit of notoriety across the globe.

William Gary Busey was born on 29 June 1944 to homemaker Sadie Virginia and construction design manager, Delmer Lloyd Busey in Goose Creek, Texas. Gary's time in the Lone Star State was short-lived, however, as the Busey family made their way to Tulsa, Oklahoma, when he was in the fourth grade.

Gary Busey graduated from Nathan Hale High School before making his way to Coffeyville Community College. Then, Gary was off to Pittsburg State University in Pittsburg, Kansas, to play football on a scholarship. Finally, he would transfer to Oklahoma State University, where he left school just one class shy of graduation.

The Beginning of Gary Busey's Career

Gary Busey's time in the entertainment industry began not on a film or television set, but playing drums. He was the drummer in "The Rubber Band", and performed with several other famous bands, including those of the legendary Willie Nelson, Kris Kristofferson, and Leon Russell.

He broke into the film and television world in 1967 with a couple of small, uncredited roles on The Love-Ins and Wild in the Streets. Once the 1970s rolled around, Gary began building his resume with credited gigs, including the role of Harvey Daley, the last character to be killed on popular Western drama Gunsmoke.

From there, Gary Busey's movie career began to take off. He made his major film debut in 1974, playing a supporting role in a film starring Clint Eastwood and Jeff Bridges called Thunderbolt and Lightfoot. Then, he went on to act alongside Kris Kristofferson in A Star is Born, a classic American musical that was remade by Bradley Cooper and Lady GaGa.

But the Hollywood star surprised everyone further by revealing that he was also the voice behind the singer, having been musical for over 25 years prior. In an interview with the Chicago Tribune, Gary says: "I think that was the first movie where all the songs were recorded live, in a single take." A pretty impressive achievement for a rising star.

From Movie Star to TV Personality

Gary Busey was destined for a life on the screen. He's been spotted in Bonanza, Law and Order, the voice of Gary in The Simpsons episode "On a Clear Day I Can't See My Sister" and then he transitioned into reality TV. Gary Busey starred as himself in 8 episodes of Celebrity Fit Club, Celebrity Wife Swap, and also entered the Celebrity Big Brother house in 2014. Busey was a key member of Big Brother, and was ultimately crowned the winner. He continues to be a huge personality on various talk shows, sharing his stories and knowledge with fans worldwide.

Gary Busey's performance in movies and television led to an accolade of awards during his career. To start, Gary won the Oscar for Best Actor in The Buddy Holly Story, followed by Best Actor in a Dramatic Series for The Hitchhiker (1983) and Best Ensemble Cast for Matt's Chance (2013). Then a series of nominations swept the star of his feet, from BAFTAs to Golden Globes.

Gary Busey first married Judy Helkenberg in 1968. In 1971, she gave birth to the pair's first child, a son named William Jacob "Jake" Busey, who has since followed his father's footsteps into the entertainment industry. Following Gary's divorce from his first wife in 1990, he began a relationship with stunt coordinator Tracy Hutchinson, who is the mother of his second child, Alectra. He married actress Tiani Warden in 1996, but they parted ways in 2001. Since 2008, Gary has called Steffanie Sampson his partner, and in 2010, she gave birth to his third child, a son named Luke Sampson Busey.

The Accident and the Aftermath

A known risk-taker, Gary Busey lived life on the wild side on and off screen. In 1988, Gary had a life-changing motorbike accident, which led to substantial face injuries. The actor then got cosmetic surgery, which is when he opted for the big teeth that he is famous for today.

As a result of the accident, he sustained a severe brain injury and had to undergo brain surgery for a subdural haematoma. Gary says he briefly died at this point: "I had an accident on a Harley-Davidson. I went off the bike without a helmet, hit my head into a kerb, split my skull, passed away after brain surgery and went to the other side – the spiritual realm where I got information. And I came back, and these messages, these definitions, came to me first-class." Gary Busey's devotion to religion and God is no secret, and in 1996 he openly told Hollywood that he is a proud Christian.

However, due to the serious brain damage, Gary developed a few tics and mannerisms, later described as "Buseyisms". Sometimes his thought streams are not as coherent, and he has been known to get quite flustered in interviews.

Gary says that despite the trauma, he believed that the accident changed him for the better and has been a part of his learning journey. In fact, Busey took this as a sign from God to campaign for new safety laws. It was at this point where he met former U.S. president, Bill Clinton, and together, they created the Traumatic Brain Injury Act. This made wearing helmets mandatory for both motorcyclists and passengers.

Where is Gary Now?

Gary Busey lives in Malibu, California, with his partner in comedy, Steffanie and "Greenie" their pet budgie. In 2018, he wrote his memoir "Buseyism", which documents his fantastic life stories, words of wisdom, relationship with God and more. Gary also released a new comedy miniseries called "Pet Judge" which aired in 2020, playing the character "Pet Judge". This faux reality show has everything in the name: it is a court drama, involving a pet psychic, a medium, a dead goat, deceit and bizarre plotlines. As a result of many cancer scares, past injuries and hearing loss, the star receives a lot of support from his family. Although he still continues to write, play, act and sing to this day!…

Hollywood star and American actor, Gary Busey, is best known for his portrayal of the titular character in The Buddy Holly Story (1978), Lethal Weapon (1987) and Point Break (1991). Gary Busey is considered somewhat of a legend, having over 100 credits in film and TV. He's been described as an "odd and… 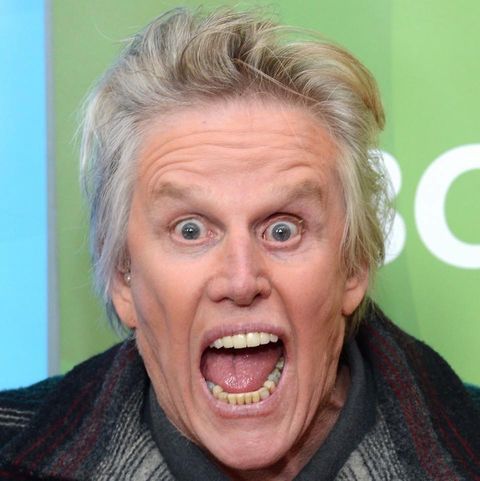 Shout out package
Book me for a personalised video message for any occasion for you or a loved one
Consumer£300
Business£5000
Performance package
Book here for a longer video from me. Business/Branding requests are at a higher price point.
Consumer£325
Business£5000
1 Hour Virtual Experience 🥳
Book a 1-hour virtual meet and greet with me!
Consumer£5000
Business£15000
Book Now