Geoff Capes is one of the most well-known British athletes in sporting history. He is considered one of the best British shot putters of all time, has held world records, and won a plethora of titles in numerous events during his career. Two of his biggest achievements include becoming the World's Strongest Man and a Commonwealth champion on multiple occasions. And, as a professional Highland Games competitor, he was a six times world champion. He has also won numerous other titles in major events over the decades.

Geoff Capes participated in his first World's Strongest Man event in 1980, after winning both Britain's Strongest Man and Europe's Strongest Man. He finished in third position. Capes took second place in the 1981 competition, claimed the fourth spot in 1982, and won for the first time in 1983. While Capes lost the title to Jón Páll Sigmarsson in 1984, he stole it back the following year.

Capes is modest about his achievements in these competitions. During an interview with Viking Strength, Capes said: "I am the first to say that I am not the world's strongest man. I won a televised event called The World's Strongest Man and I was the best at the time that I competed and whom I competed against."

Geoff Capes at the Commonwealth Games

Capes participated in the prestigious Commonwealth Games on multiple occasions during his long, successful career. He first became a Commonwealth champion in 1974, when he won the gold in the shot put with a distance of 20.74 metres. He finished fifth in the discus throw that same year too.

Capes won the gold medal again at the 1978 Commonwealth Games in Edmonton, Canada; he achieved a distance of 19.77 metres.

Geoff Capes is twice European champion at the European Indoor Championships. He took part in numerous events from 1971 onwards, and worked his way up from the 10th spot until he claimed the gold medal at the 1974 event in Gothenburg, Sweden. He achieved a distance of 20.95 metres in the shot put.

He finished in second place in 1975, but won the second of two Indoor European Championship titles in 1976.

The World Muscle Power Championships (also referred to as the World Muscle Power Classic) ran annually from 1985 to 2004. It took place in Scotland until 2002, then switched to Quebec for the final two competitions. This contest was widely considered to be the world's second-most prestigious strongman event at the time, with the World's Strongest Man in the top spot.

Each contest spanned two days and included several events, such as the Tree Trunk Lift and the Anvil Hold. Geoff Capes took part in the inaugural competition alongside other well-known strongmen like Bill Kazamier and the late Jón Páll Sigmarsson. Capes won the 1987 World Muscle Power Championships, and came in second place at the 1985 and 1988 events.

Geoff Capes competed in the shot put at the Olympic Games three times. Capes first competed in the Munich Olympics at just 21, but unfortunately didn't make it past the qualifying round.

However, he was on form when he took part in the Montreal Olympics four years later. He was considered one of the athletes most likely to claim the coveted gold medal, and looked to be on track when he achieved second place in his qualifying group. Eventually, he placed sixth in the final, and fifth in the 1980 Moscow Olympics.

Having held world records, Geoff Capes is highly qualified to coach other athletes. And that's what he did after he retired from participating himself. He told Viking Strength: "I have a good squad of athletes of all ages that I coach and they all have exceptional talent. I feel that many of them will be big names in the future."

Success Outside of Sport

Geoff Capes has racked up many achievements outside of sports. Famously, he was the inspiration for a computer game on the ZX Spectrum, Commodore 64, and Amstrad CPC in 1985: Geoff Capes Strongman. Players took part in six events including wrestling and tug-of war.

Capes also appeared on the television series Supergran, Blue Peter, Shooting Stars, Bullseye, Blankety Blank, Celebrity Squares, Surprise Surprise, You Bet! and many more. He is also known as a budgerigar breeder, and became president of the Budgerigar Society in 2008. Today, Geoff lives in Stoke Rochford, near Grantham.…

Geoff Capes is one of the most well-known British athletes in sporting history. He is considered one of the best British shot putters of all time, has held world records, and won a plethora of titles in numerous events during his career. Two of his biggest… 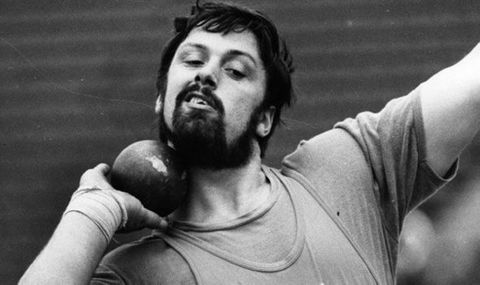