M
Mike
Shout out
Wedding
Really user friendly, got what I wanted in a timely manner
Apr 2022
T
Thomas
Shout out
Birthday
Really appreciate this James - Mum is going to love it!
Jul 2021
Cancel

M
Mike
Shout out
Wedding
Really user friendly, got what I wanted in a timely manner
Apr 2022
T
Thomas
Shout out
Birthday
Really appreciate this James - Mum is going to love it!
Jul 2021

Bodybuilder, actor and TV personality "Hunter", featured on the sports entertainment series Gladiators between 1993 and 2000. James Crossley (aka Hunter) was crowned Ultimate Gladiator in 2000. Hunter has had a very successful career in bodybuilding, competing until he was 45 years old. He also broke the world record for lifting the Dinnie Stones in May 2018 – a pair of Scottish granite stones that weigh 332.49kg in total. Crossley stole the spotlight on and off-screen, and is one of the strongest men on the planet. Former Gladiator "Hunter" now runs his own fitness consultancy in London.

James Crossley was born in York, England on June 12, 1973. His star sign is a Gemini, which is a zodiac known for being curious, intelligent and agile. Since the age of 15, Hunter competed in several bodybuilding competitions, winning Teenage Mr York and Teenage Mr England. The bodybuilder aspired to become Mr Universe, before making his debut on Gladiators.

Hunter: Gladiators of the UK

Gladiators was a new series that first hit screens in 1992. The show featured two male and two female contestants, who would compete in a series of physically demanding events. One example of the games is "Catapult", where two Gladiators are attached to a bungee cord, and whilst jumping they have to throw balls into octagonal-shaped hoops to score goals. Meanwhile, the other two contestants try and block their shots.

Another popular game was Pole Axe, where two gladiators race to the top of a 36ft tall pole by climbing it. The first gladiator to reach the top would hit the buzzer on their pole, which ejects pegs on the other contestant's pole, causing them to drop and fall to the crash mat below. The whole race lasts around 30 seconds, but was the ultimate test of strength and focus.

Reaching a height of 6ft 3, James Crossley qualified for the TV game show "Gladiators", which is where he received his nickname "Hunter".

Hunter was undoubtedly one of the most popular gladiators, with a number of fans worldwide, but was also the youngest gladiator in the show's history. At just 19 years of age, he qualified and made his debut in 1993. He revealed to the Metro recently that they would often film two shows per day for Gladiators; but unbeknown to viewers was that his shoulder was dislocated for seven months during filming! Due to the demands of the show, he couldn't fix the problem until the series ended.

The uncontested champion in The Wall and Duel games, Hunter quickly rose to stardom. In 2000, Hunter competed in The Battle of the Giants, one of the biggest showdowns of his career. As a result, he was crowned the "Ultimate Gladiator" in the UK.

James Crossley moved from bodybuilder to actor during the next stage of his career, and has several acting credits under his belt. This includes starring as Chad in the TV series "Lexx" in 2001, as well as spin-off episodes on The Upper Hand, Adam's Family Tree and Emmerdale.

Crossley had a brief stint in Hollywood, moving to LA and performed as Charles in Shakespeare's classic play "As You Like It" at the Ahmanson Theatre. Subsequently, he toured for 8 years performing in various plays across the USA.

Hunter also joined the Hull Truck Company, a theatre group in Hull, which aims to perform plays that promote diversity and social change.

James Crossley recently appeared as a contestant on Channel 4's TV show "The Circle" in 2021. This mimics the world of social media and catphishing, requiring real-life strangers to compete in a series of random games and challenges. The objective is to convince the stranger that you are a different person. It is a game of wits, in which the winning contestant receives a cash prize.

Hunter "James Crossley" created a fake profile, pretending to be "Gemma" a nurse from the NHS. When Gemma's true identity is revealed to an unsuspecting Andy (an entrepreneur), the public were left stunned when he came clean. But to Hunter's dismay, he was "blocked" off the show, losing out on the £100,000 cash prize that he pledged to donate to the NHS.

The Hunter Gladiator appeared on other TV shows as himself, such as Celebrity Juice, Ready, Steady, Cook! and the TV movie documentary Britain's Favourite Game Shows. Clearly you can't take the gladiator out of the Hunter.

During the Hunter years, the former gladiator admitted to bashing his thumbs with a hammer in order to kill his nerve endings to allow him to lift heavy weights. The bodybuilding legend moved further into fitness, presenting his own TV show on ITV2 called "Peak Performance". Hunter also released a fitness DVD for those over 40 titled, "Fit at 40" in 2018, in an attempt to campaign for better regimes for older cohorts.

Nowadays, he opts for a "pain-free" life, instead of the brutal battles and competitions from his earlier years. After the pandemic hit in 2020, James Crossley took this as an opportunity to give up his Strong Man days. The star now credits his healthy shape to yoga, long baths, the didgeridoo and the handpan drum, which gives him "real purpose".

Where is Hunter Now?

James Crossley shifted his focus towards health and fitness, and is now a personal trainer, yoga instructor and coach. He opened his own consultancy called Chelsea Fitness, alongside former Gladiator "Ace" (aka Warren Furman) which has a base in London and Marbella. The former gladiator has also shared his secrets, developing an app called "PT in 1" for personal trainers. James "Hunter" has given up the gold, now living humbly in York with his girlfriend (whilst also keeping up with his fans on Thrillz!)…

Bodybuilder, actor and TV personality "Hunter", featured on the sports entertainment series Gladiators between 1993 and 2000. James Crossley (aka Hunter) was crowned Ultimate Gladiator in 2000. Hunter has had a very successful career in bodybuilding, competing until he was 45 years old. He also broke… 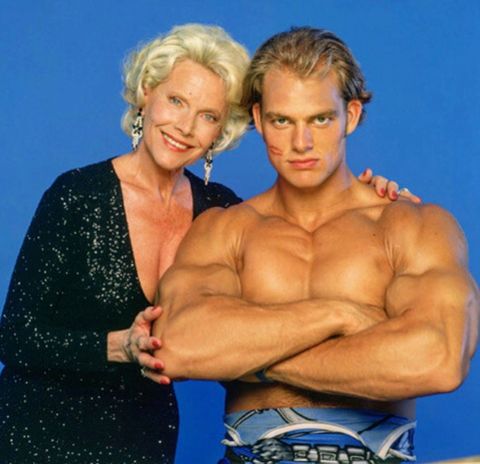