The star of Netflix's hit television series Stanger Things and the epic 2018 reboot of the 1980s horror movie, The Predator, is American actor Jake Busey. He is known to some by his full name William Jacob Busey or "The Tooth" and the son of Hollywood's Gary Busey. The actor, voice actor, film producer and more has appeared in some of the biggest TV series and major films up on the big screen since he began his career at just seven years old.

Getting Started from a Young Age

Jake Busey was born in Los Angeles, California on June 15th, 1971. He spent most of his childhood practicing his two favourite hobbies: playing the drums and acting. By the age of five, he had already decided he wished to pursue a career in one of these, and by seven he made his debut on the screen, playing the role of Henry Darin in the 1978 film Straight Time.

Being the son of famous actor Gary Busey, Busey spent a lot of time on film sets, so it was no surprise that Jake would follow in his footsteps. But for him to secure a role in a feature film at such a young age was certainly a sign of the impressive career that did indeed follow.

Jake Busey got further tastes of the Hollywood life when he went on tour with bands his father played in, with members such as Willie Nelson, Little Feat and Leon Russell tagging along, too.

The 1980s and 1990s were promising times for Busey Jr. Jake had a number of roles including one alongside Reece Witherspoon in the black comedy S.F.W. playing the role of Morrow Streeter. However, his biggest film breakthrough at the time was in the 1996 Peter Jackson horror comedy film "The Frighteners" alongside Michael J. Fox. Here, he played Johnny Charles Bartlett, one of the main characters of the film.

During the same year, Busey found himself in the epic disaster movie Twister, where he played a mobile lab technician. Despite not being one of the main characters, this was still a substantial step in his career.

1992 saw Jake Busey's first appearance on the smaller screen as he took the role of a student in the mini television series Cruel Doubt. A couple of years later, he found a more substantial role as one of the main characters in the TV movie Motorcycle Gang, where his character was his namesake.

After a selection of random appearances in TV series throughout the rest of the 1990s, Busey appeared in an episode of the revival of the classic American TV show The Twilight Zone in 2002, playing the role of Vincent Hansen, before a brief appearance in the famous fantasy show Charmed.

Busey's performance in The Frighteners must have turned some heads, as into the turn of the millennium he appeared in more and more films. One of his biggest roles came in the 1997 science fiction classic "Starship Troopers" where he played Private 'Ace' Levy, a role that many consider to be a major breakthrough for Busey.

Another blockbuster film that Jake Busey appeared in came immediately the year after: 1998's Enemy of the State. Here, Busey played an NSA agent called Krug and did so in fine style. 1998 also saw Busey land a role in Home Fries alongside Drew Barrymore and Luke Wilson.

In the next year, he'd share film sets with Jamie Foxx and Denise Richards in Held Up (playing Beaumont) and Tail Lights Fade (playing Bruce) respectively.

Into the 2000s, Busey landed roles in a number of films, the highlights of which include the part of Officer Treen in Christmas with the Kranks, Lieutenant Samuelson in H. G. Wells' War of the Worlds and 'Wild Bill' Decarie in Road House 2.

Rising in Popularity on the Smaller Screen

The end of the 2000s decade and into the 2010s were a little spare in terms of television acting performances for Jake. He didn't manage to find anything for eight years, then suddenly landed one of the biggest roles of his life.

In 2014, Busey found the TV show that he spent the longest stint of his career in: horror series From Dusk Till Dawn, developed by Robert Rodriguez. He starred in 26 episodes from the first to the final season as the character Professor Aiden Tanner, otherwise known as 'Sex Machine'.

Jake thanked Robert Rodriguez for his part as Aiden Tanner in Dusk Till Dawn, claiming it "saved" his career. And this could well be true! Dusk Till Dawn opened the door for Jake to land a part in an episode of Justified and two episodes of Texas Rising, playing the character Samuel Wallace, the following year.

Jake started the 2010s with an appearance as Greene in the crime film The Killing Jar. Throughout this decade, the actor also appeared in "Nazis at the Center of the Earth" as Adrian Reistad, Reaper as Bill, Tarkin in Most Likely to Die and The Predator as Sean Keyes, to name a few!

One of the biggest movies Busey starred in during this period was 2016's Deserted. The film is about a group of friends who get 'hopelessly lost' in Death Valley, California, on a road trip to a music festival on 'unforgiving topographical terrain'.

Busey's most recent film acting performance was in 2020's A Soldier's Revenge. Here, he played the role of Captain McCalister.

After his role in Robert Rodriguez's From Dusk Till Dawn, Jake Busey's television acting career really picked up. He was in several episodes of shows through 2017, namely Carl in Day 5, Acid Man in Ray Donovan and Earl in Freakish.

Netflix and Marvel's Agents of S.H.I.E.L.D. was next in his scope, and he landed a role as Tony Caine for two episodes in this. Busey wrapped up 2018 with a brief role in NCIS as Whit Dexter.

One of the biggest shows to hit Netflix in recent years was the sci-fi drama Stranger Things, and Jake Busey landed a big role in that as Bruce Lowe alongside Finn Wolfhard. We hope to see Jake in future seasons of this show!

One thing a lot of people don't know about Jake Busey is that he is a keen voice actor and film producer when he is away from the screen. He has played voice roles in three video games throughout his career (Spec Ops: The Line as Robert "Radioman" Darden, XCOM 2: War of the Chosen as the DJ of Resistance Radio, and Predator: Hunting Grounds as Sean Keyes).

He's worked in production for two films, 2005's Rain Maker where he also played the character of Shaw and 2011's Cross where he played "Backfire".

Like his father, Busey has his pilot's license. He acquired this in September 1997, around the same time that he learned to play the violin for his role in Starship Troopers! A man of many talents. Busey also likes to build custom motorbikes and enjoys racing off-road.

What's Next for Jake Busey?

Jake Busey has one of the most illustrious acting careers in the world, so you can bet that he'll be back on the screen very soon. For the time being, he lives in Los Angeles with his daughter and fiancé, April Hutchinson.

If you wish to hear from the man himself, you can request a personalised video message on Thrillz. Looking to start a career in acting and need some encouragement? He's the guy! Have friends who are fans with birthdays coming up? Have Jake create a film for them to say "congratulations".…

The star of Netflix's hit television series Stanger Things and the epic 2018 reboot of the 1980s horror movie, The Predator, is American actor Jake Busey. He is known to some by his full name William Jacob Busey or "The Tooth" and the son of Hollywood's Gary Busey.… 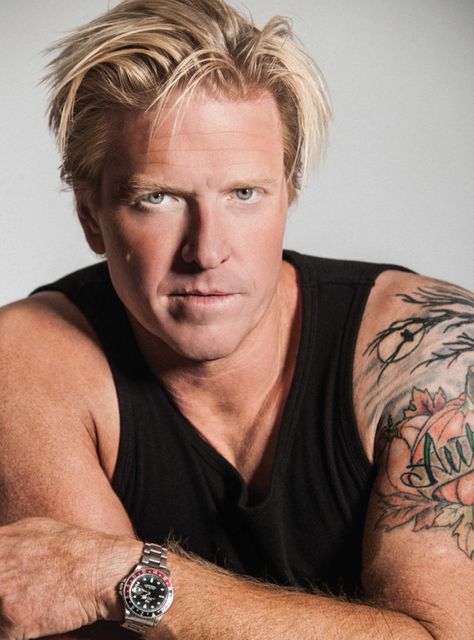