S
Simon
Shout out
Just because
great video. No problems. Sincere man.
Dec 2021
B
Bianka
Shout out
Christmas
Is there any possibility please to redo the video please and pronounce Gyuri papa as you would George.…
Dec 2021
A
Anjan
Shout out
Surprise!
Sorry for the late review. You smashed it! Thanks so much!!!!
Feb 2021
Cancel

American Actor, Kevin Sorbo, was one of the biggest stars of the 90s. He has quite an impressive repertoire of movies, television, and video game credits. However, it was land… read more

S
Simon
Shout out
Just because
great video. No problems. Sincere man.
Dec 2021
B
Bianka
Shout out
Christmas
Is there any possibility please to redo the video please and pronounce Gyuri papa as you would George.…
Dec 2021
A
Anjan
Shout out
Surprise!
Sorry for the late review. You smashed it! Thanks so much!!!!
Feb 2021

American Actor, Kevin Sorbo, was one of the biggest stars of the 90s. He has quite an impressive repertoire of movies, television, and video game credits. However, it was landing the titular role in the 1990s television series, Hercules: The Legendary Journey, that made him a household name. Since then, Kevin broke out of Hollywood as a successful actor, director and executive producer, with a career spanning from the mid-1980s to the present day.

Kevin David Sorbo (the son of Lynn and Ardis Sorbo) was born 24 September 1958 in Mound, Minnesota. During his high school years, Kevin developed a love for sports and excelled in his school's football, baseball, and basketball teams. This athleticism followed him to college at Minnesota State University Moorhead, where he continued playing the same three sports he enjoyed during his adolescent years and added hockey to the line-up, too.

The marketing and advertising double major didn't just spend his entire college career consumed by sports; while at MSU Moorhead, Kevin Sorbo took his first steps into the entertainment world by taking up modeling and theatre.

After graduation, Kevin left Minnesota and traveled across Europe and Australia, picking up television commercial roles along the way. By the time the 1990s rolled around, Sorbo would have over 150 commercial credits to his name, including one for Jim Beam bourbon whiskey.

Though most of Kevin's acting gigs throughout the 1980s and 90s were commercial roles, the Minnesota-native managed to land a few guest spots on a few television series, including Santa Barbara, Cheers, and Murder, She Wrote. But landing the leading role of Hercules in Hercules: The Legendary Journeys established the actor's place in Hollywood.

Kevin's role on Hercules, one of the highest-rated syndicated television shows at the time, lasted from 1995 to 1999. Sorbo starred alongside Michael Hurst, who played the character Iolaus. He also directed two of the show's 111 episodes and co-wrote one. Kevin Sorbo was the perfect fit for the hunky character Hercules, whose charm and charisma worked well in his favour. Hercules ran for six seasons, winning several awards from the New Zealand Film and TV Awards in 1999 for Best Director and the Top TV Series in 1998-9 for ASCAP Film and Television Music Awards.

Kevin Goes to the Movies

After Hercules, the actor broke into the film industry making Kevin Sorbo is a success story. He played Kull in the Universal Pictures adaptation of the popular fantasy novel, Kull the Conqueror (1997). The search for an actor that would nail the demands of Kull's character was tough, but Sorbo rose to the challenge. Kull the Conquerer was a fun play on the original plot, giving Sorbo a great opportunity to excel in his career as the leading star.

Since then, Kevin has taken on countless roles in movies and television series, including but not limited to Andromeda (2000-2005), Soul Surfer (2011), and God's Not Dead (2014). He's even gone on to lend his voice to popular video games, reprising his character (Hercules) in Sony Computer Entertainment's God of War III. These early roles then led to another big break, where he played Crusher in Activision's Skylander series.

In 2010, Kevin Sorbo also starred in the drama film What If... alongside Hollywood star, John Ratzenberger, quickly rising up the ranks in the industry. Sorbo is now definitely one of the most recognisable actors of his generation.

Perhaps one of Kevin Sorbo's most notable roles was when he starred as the character Professor Jeffrey Radisson in God's Not Dead. Sorbo played the atheist Professor very convincingly, with the major plot twist being the character's death shortly after becoming a Christian. The film script was inspired by the lawsuits involving the place of the Christian faith in the country, which was a serious national issue at the time.

A Rising Star: Awards and Nominations

After over two decades of acting, Kevin won Best Actor at the Christian Film Festival-Menchville Baptist Church for The Reliant (2019) where he played the character Rick, alongside actor Julia Denton. He also won Best Actor and Producer for One Nation Under God (2020), in which he also starred as the character Mr Truman. This was a major movie title sharing an important message about faith and the invention of religion.

Behind the scenes of Hercules, Kevin Sorbo's health was suboptimal, and he suffered from many strokes during filming. Sorbo openly admitted struggling with his health, particularly with anxiety and depression after the series of strokes. He said that psychotherapy also helped him in the recovery process; despite Kevin often playing immortal characters with super-strength, the star admitted he is no God.

In an interview with Brain and Life, Sorbo said "My illness made me special in a way that I never wanted nor expected," he says, "I'm not Hercules; I'm a mere mortal with human limitations and problems. But I am determined to not behave like a victim anymore." Health scares are a test of character and resilience, but Sorbo now talks about his struggles in an attempt to help others spot the signs.

When he's not with family or filming a show or movie, Kevin works as chair and spokesman for his non-profit organization, A World Fit For Kids! The charity trains teenagers to be mentors to younger children. He is also known for raising stroke awareness after his personal battle in 1997. For these efforts, Kevin received both the Public Leadership in Neurology Award from the American Brain Foundation, the American Academy of Neurology and the Inspiration Honors Award from the Invisible Disabilities Association in 2013.

Where is Kevin Sorbo Now?

Kevin Sorbo has made a name for himself as an actor, director, and is now a producer at Wildfire Films. His experience throughout the ages continues to fund and develop the film industry. You can also find Kevin right here on Thrillz, creating personalised video messages for all Hercules fans!…

American Actor, Kevin Sorbo, was one of the biggest stars of the 90s. He has quite an impressive repertoire of movies, television, and video game credits. However, it was landing the titular role in the 1990s television series, Hercules: The Legendary Journey,… 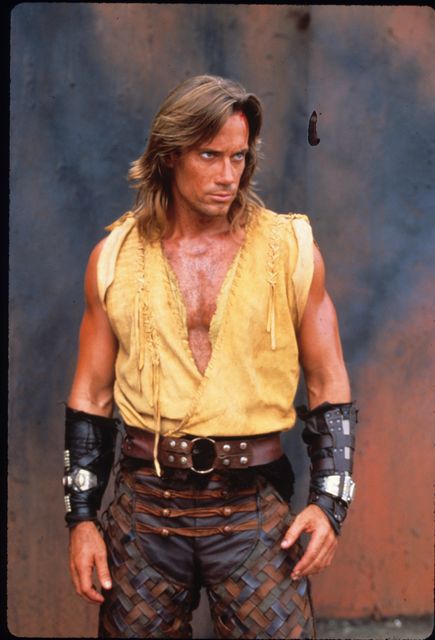