Born in Reading, "Mad Dog" Martin James Allen (date of birth 14th August 1965) is a household name for many football fans across the country. His extensive experience as both… read more

Born in Reading, "Mad Dog" Martin James Allen (date of birth 14th August 1965) is a household name for many football fans across the country. His extensive experience as both a player and manager for a number of top-tier English football teams, namely West Ham United, is the source of his popularity. Throughout his playing days and those in management, Martin Allen has claimed his position as a legend for many fans of the game.

Football as a Young Lad

Growing up in Reading, Berkshire, Martin Allen fell in love with the beautiful game alongside his whole family. His memories as a little boy are "all related to football" and a big part of this was the fact that his father, Dennis Allen, was a Reading football club hero, scoring 94 goals in 377 appearances for them. He even became club captain for a season!

Martin Allen reflects fondly on his childhood at Elm Park (Reading have since moved to the Madjeski Stadium) and pinpoints the moment he decided he wanted to become a footballer to a Tuesday night game at the age of 13, when he found himself idolising the player Richie Bowman.

He clearly had a natural talent for the sport and found himself training with one of the biggest clubs in the world, Manchester United, at the age of just 14. He'd already been invited to Chelsea and Aston Villa at this point, but never signed a contract with any of these clubs.

The playing career of Martin Allen began in 1983 when he signed for London club Queens Park Rangers. He spent six seasons as a midfielder for them under the management of George Graham, and perhaps the highlight of those six years was his appearance in the 1986 League Cup final. Unfortunately, Queens Park Rangers lost that particular game 3-0 to Oxford United, but this step into the limelight put Martin Allen on the radar for other clubs and for quite a hefty price tag, too.

During Martin Allen's time at Queens Park Rangers, he made a total of 136 appearances and scored 6 goals in them. This might not seem like a huge amount for a spell of six years, but it was the next stage of his football career that things really began to take off and first-team football became a regular fixture for him.

Stepping into the Top Flight

Martin Allen's time at QPR helped him chalk up a value of £670,000, the price West Ham United paid for him in 1989. Signed by new manager Lou Macari, Allen scored the second of three goals in the 3-2 West Ham United win over Plymouth Argyle on his debut with further goals coming from Kevin Keen and David Kelly, a great way to get started!

Billy Bonds took over West Ham United not long after this and under his management, Martin Allen helped to get West Ham United promoted to the First Division in 1991. This became the Premier League in 1993, the top flight we know and love today.

It was during his time at West Ham United that Martin Allen began to establish himself as a bit of a bad boy, which eventually led to him being nicknamed "mad dog". He was often booked throughout his West Ham career and was famously sent off for a nasty challenge on Mark Patterson of Derby County.

In September 1995, Martin Allen made a £500,000 switch to Portsmouth. However, things did not go quite as planned during his time at Fratton Park as he only scored four times over 45 appearances for them. His first season was a loan spell and during this, things were going well. It was when he switched to a permanent contract that his form trailed off.

After three years at Portsmouth, Martin Allen moved on to Southend United for a very brief lone spell lasting just five games. He then decided it was time to retire and pursue a career in management instead.

Returning to His Hometown

At the end of the 20th century, Martin Allen started his career in management. During a brief stint as the manager of Portsmouth's reserve team, he found himself playing against Reading's reserve team, then managed by the legendary Alan Pardew. The 4-0 win he achieved on that Monday night put him on Pardew's radar, which eventually led to him becoming an assistant manager for Reading in January 2000.

Martin Allen claims he didn't even sign a contract with the club, such was his excitement to return to the club where it all started for him. He didn't even want to know how much money was being offered to him! During his time as Reading assistant manager, Martin Allen helped Alan Pardew and the team avoid relegation in one season and then into promotion to Division One two years later.

Becoming a Head Coach with Barnet

In 2003, Martin Allen took his first job as a senior manager and penned a deal with London club Barnet in the National League (the fifth flight of English football). During this time, he had to build a whole team from scratch and after he did so, Barnet flew several positions into the top half of the table.

As their new manager, Martin Allen instantly won the hearts of many Barnet fans so it was much to their disappointment that he left the club after just one year in charge, in March 2004. The move made sense for himself, though, as he climbed three divisions with it.

Up Through the Leagues

March 2004 saw Martin Allen take things to the next level as he took charge of West London club Brentford, the place where he stayed for the next two years. He had a great time at the club, proof of which can be found in his qualification for the Championship playoffs (unfortunately being knocked out on both occasions, but not far away from the promotion!).

In two consecutive years, Martin Allen took Brentford to the fifth round of the FA Cup, being knocked out by Southampton and Charlton Athletic respectively. The latter of these two seasons saw Brentford beat Premier League side Sunderland, a true giant killing and something Martin Allen can be very proud of.

During his time at Brentford, Martin Allen applied management techniques that were out of the ordinary, but they were certainly effective and the fans fell in love with him. Unfortunately, however, Martin Allen saw fit to leave the club after his second season in charge, blaming his decision on poor board management.

A Step Back to League 2

Martin Allen decided to make the move to League 2 club, Milton Keynes Dons, for the season of 2006/07. At the time, the club had a lot of financial backing from their owner and Martin Allen felt that there was an opportunity to turn their fortunes around. Sadly, this did not appear to be the case, and Martin Allen quickly lost patience with the Dons. He left after just one season in charge.

In and Out of Barnet

After leaving the Dons, Martin Allen moved onto the then Championship side Leicester City and came close to signing internationally famous Dutch striker Jimmy Floyd Hasselbaink while he was there. However, he left after just four games in charge.

Next up, Martin Allen moved onto Cheltenham Town, a side that his father has previously managed. Allen stayed there for three years, before moving back to his old club Barnet for three games. After this, he signed up with Notts County in 2011 but was unfortunately sacked one year later.

Martin Allen then moved on for a third spell at Barnet before joining Gillingham for a year and a half, then onto a fourth Barnet spell in the year, building up to 14 games in charge at Eastleigh. He simply could not stay away from Barnet as he went back from an incredible fifth managerial spell with them in 2018.

Martin Allen's latest managerial job was a short stint at Chesterfield, a team he was fired from in 2018.

Life Outside of Playing and Managing

During his time as a footballer, Martin Allen ran a football school programme across 13 towns. He holds an LMA's Certificate in Applied Management at Warwick University and writes a column for the Daily Mail named "Mad Dog on Monday".

Another claim to fame for Martin Allen is the hot dog named after him. A few years back, his son Charlie called him to say that he had found the "Mad Dog Hot Dog" at the West Ham United stadium.

Martin Allen is married to wife, Lisa Allen, and the pair have a son together called Charlie. Like father, like son, Charlie also plays football for Isthmian League club Cray Wanderers as a midfielder. In his spare time, Martin enjoys golf, pilates and a light spot of gardening. He currently lives in the quaint village of Wargrave (Berkshire) with his family.…

Born in Reading, "Mad Dog" Martin James Allen (date of birth 14th August 1965) is a household name for many football fans across the country. His extensive experience as both a player and manager for a number of top-tier English football teams, namely West Ham United, is the source of his popularity.… 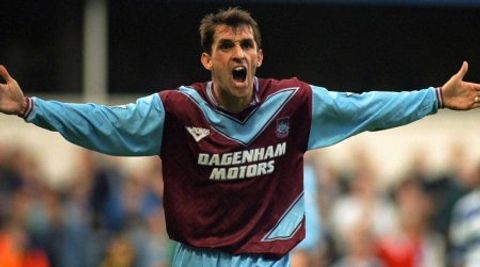