Steve Bull (born Stephen George Bull) is a highly respected ex-professional footballer, who played at club level most notably for Wolverhampton Wanderers and internationally for England. He played in the position of striker and scored a total of 327 goals over 504 appearances in his career. Today, Bull remains one of the most respected players of his time.

Stephen George Bull was born in Tipton, Staffordshire. He shined early on playing for his school football teams at both Wednesbury Oak Primary School and Willingsworth High School. He also notched up appearances for various junior teams, including Ocker Hill Infants, Red Lion and Newey Goodman. Steve Bull later left school in 1981 to join non-league Tipton Town. At the same time, he held down various factory floor jobs to make ends meet. Steve Bull continued playing local league games while working, such was his love for the game.

Steve Bull secured a move to West Bromwich Albion after being recommended to them by his Tipton manager, Sid Day. He rose quickly through the club's youth ranks and into first-team contention before being offered a professional contract. He made his professional debut against Crystal Palace on 23 October 1985 as a substitute, and then went on to make his full league debut to Sheffield Wednesday on April 22. They remain his only league appearances for the club. Unfortunately, West Brom were relegated to the second tier of English football in 1986. He played five more games for the club, scoring three times, before deciding to leave in search of regular first-team football.

Steve Bull joined Wolverhampton Wanderers in 1986, where at the time, they were toiling away in the fourth division of English football. His debut came against Wrexham in November 1986, and his first goal of many came against Cardiff City in December. In Bull's first season for Wolves in the fourth division, he scored 19 goals. Unfortunately, the club narrowly missed out on promotion that year, losing to Aldershot in the playoffs.

The Fourth Division Championship and Promotion

In the 1987-88 season, Steve Bull and the Wolves won the fourth division and were promoted to the third division. Bull enjoyed a prolific season in front of goal, scoring no less than 52 goals in all competitions, including hat tricks in league appearances against Exeter City and Darlington.

Bull inspired Wolves to yet another division title and second successive promotion in the 1988-89 season in the third division. He broke the 100 goal threshold for Wolves in a third-division game against Bristol City in 1989. Bull's impressive total of 102 goals in two seasons also earned him a call-up to England where he scored in his debut against Scotland.

Despite not long ago being on the brink of going bust, Wolves now found themselves in the second tier of football in England. This was in large part thanks to Steve Bull's sensational form and goal-scoring record for the club. Although Bull had another good season, Wolves failed to secure a third successive promotion missing out on the playoffs in 1989-90. Despite serious interest from other teams, Bull remained loyal to Wolves for the remainder of his career.

Steve Bull and Other Clubs

In 1995, Bull turned down an opportunity to play in the Premier League with Coventry City, after a huge outcry from the gold and black sector of the midlands at the news he would be sold. Bull played only one game in the top flight, all the way back in his West Brom years. Unfortunately, he would never have the chance to play top-flight football again.

Steve Bull continued playing for Wolves until 1999, where his first-team appearances started to become limited in his final two seasons, thanks to a series of successive knee injuries. Bull finally admitted defeat and called time on his Wolves career on 13 July 1999, after 13 incredibly successful years at the club. Steve had scored his final league hat trick two years prior, and his final hat trick of all competitions in a 5-0 win against Barnet.

Bull's final goal for Wolves came against Bury on 26 September 1998, and his final match came against Bradford City on the last day of the 98-99 season. In July 2006, Bull made one final appearance for the club in his 20th-anniversary testimonial game against Aston Villa.

During his 13 illustrious years at Wolves, Bull broke four of the club's goalscoring records. His Wolves stats are something to behold; holding the club's goalscoring record of all time, with 306 goals in competitive games. 250 of those goals came in the football league, which was also a club record. The remaining two records include most hat-tricks (18) and the highest goalscorer in a single season (52). It's safe to say Bull dominated lower division football with his outstanding eye for goal.

In addition to his incredible football league career, Bull had a short but sweet stint playing internationally for England. His exceptional record earned him the distinction of being one of few third-division players to be called up to the England international team. Bull scored his final England goal against Tunisia, which managed to secure him a play in Sir Bobby Robson's England World Cup squad in Italia 90. Unfortunately, Bull was unable to find the net again for his country. He finished his international career with nine goals in 23 appearances.

Bull entered management first with Hereford United as a player-manager. He had his first full management job with Stafford Rangers in 2008. He had completed a UEFA Pro B coaching licence during this time. Unfortunately, Bull was unable to prevent Rangers relegation and promptly left the club in December of the same year.

Steve Bull is a Wolverhampton Wanderers legend and is affectionately known as "Bully" by supporters. Such is his reputation with the club, the previously named John Ireland stand was named after him at the Molineux. In 1999, shortly after retiring, he became Steve Bull MBE in recognition of his services in association to football. Steve is married to Kirsty Bull and they have a daughter called Gracie-Jo.…

Steve Bull (born Stephen George Bull) is a highly respected ex-professional footballer, who played at club level most notably for Wolverhampton Wanderers and internationally for England. He played in the position of striker and scored a total of 327 goals over 504 appearances in his career. Today, Bull… 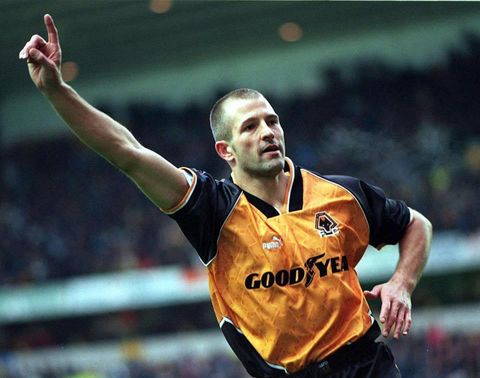