Book a personalised video from The Sooty Show
Cancel

The Sooty Show is temporarily unavailable, enter your email below to be notified when they are back

The Sooty Show is a British children’s television series, created by Harry Corbett and produced for the BBC from 1955 to 1967 and then for ITV from 1… read more

S
Stephen
Shout out
Birthday
Fantastic video. Really well personalised and well received. Ordering process straightforward and fast…
May 2021
R
Richard
Shout out
Birthday
Thank you to Richard, Sooty and Sweep for the wonderful video for my son's birthday. It was so entertaining…
May 2021
i
ivan
Shout out
mothers day
Literally speechless - BEST VIDEO EVER!!!!!!!!!!!!!
May 2021
J
Jenny
Shout out
Just because
Absolutely wonderful. Thank you so much, my Dad was over the moon.
Apr 2021

The Sooty Show is a British children’s television series, created by Harry Corbett and produced for the BBC from 1955 to 1967 and then for ITV from 1968 until 1992. According to the Guinness Book of Records it stands as one of the longest running British television programmes of all time.

The programme is part of the Sooty franchise which focuses on the mischievous adventures of the infamous puppets Sooty along with his friends Sweep and Soo. Sooty, a mute yellow bear with black ears and a nose, was mainly seen being cheeky, performing practical jokes as well as magic tricks.

The Sooty Cast and Crew

Between 1955 and 1975, Harry Corbett presented the programme until he retired, it was then taken over by his son, Matthew Corbett. Matthew chose to carry on some of Harry’s traditions, including ending every show with the line “Bye bye everybody, bye bye”.

It co-starred Marjorie Corbett as the voice of Soo from the character’s debut in 1964 until her retirement in 1981 where she was then replaced by Brenda Longman.

The programme was originally focused on a sketch-based format which featured slapstick comedy, stories and music. In the 1980s, Matthew changed the format towards a sitcom setting, in which he and the characters lived in a country cottage. Each episode saw them take on a new adventure.

The new arrangement kept some of the original elements of the show, such as songs, while incorporating narration in a number of scenes which featured just the puppets alone. Guests would often feature in episodes, alongside the use of props, performers and guest stars.

The Sooty Show was a huge success on children’s television, due to the popularity of its star, Sooty. This created numerous sequels to the show, including Sooty & Co in 1993, as well as a spin-off educational series ‘Learn With Sooty’, as well as several stage shows. Sooty also had a one-off animated cartoon series in the mid-90s entitled ‘Sooty’s Amazing Adventures’. It featured Sooty, Sweep, Soo and Little Cousin Scampi all living in an old theatre by the coast.

The Sooty Show was also made available on VHS and DVD, featuring episodes from the 1970s and 90s. The characters were also turned into a selection of toy merchandise, which also proved to be extremely popular.

The rights to the Sooty franchise were put up for sale and sold in 1996 when Matthew retired and then handed over control to Richard Cadell in 1998. The franchise suffered a few setbacks in 2004, however, Richard bought the rights in 2007 and has since made it his focus to ensure the survival of the brand, creating new stage shows and television programmes.

Richard also began working on producing a new programme, which eventually launched on CITV in 2011, entitled ‘Sooty’. Although the format did remain the same, the setting changed to focus on misadventures within a holiday park that the characters helped to run.

Additional series were still made, but focused on different locations. The programme then moved to appear on ITVBe. Richard Cadell continued to keep Sooty in the public eye, making guest appearances with him and at times, the other characters as well. In 2017, Sooty was officially inducted into The Magic Circle based upon the magic tricks he often performed with his handlers!

The Creation of The Sooty Show

The Sooty Show franchise creation can be traced back to 1948, when Harry Corbett came across a yellow bear glove puppet whilst holidaying in Blackpool. He purchased the puppet and used it to entertain his children, including his newborn son, Peter. He named the puppet Teddy. As time went on, he used the puppet to entertain more and more children, with a variety of comedy routines and magic tricks. This led to him earning a place on the BBC talent competition ‘Talent Night’.

Harry and his puppet proved extremely successful amongst the viewers and ended up winning the competition. This landed him a job as a regular performer on the BBC children’s show ‘Saturday Special’, where the puppet became even more popular amongst the young watchers, turning him into an overnight success.

The BBC then offered Harry his very own programme and he chose to modify Teddy’s appearance to help him stand out on black and white television screens. The overall change involved the use of black dust or ‘soot’ onto the puppets nose and ears, which then inspired Harry to change the puppet’s name to Sooty. The new look proved a huge hit with children and paved the way for the Sooty franchise.

The other two characters from the franchise are Sweep and Soo. They are often found accompanying Sooty on his adventures and during performances and have helped to form the backbone for The Sooty Show. They too were created by Harry Corbett.

Sweep was the first character to make an appearance besides Sooty. Sweep is a dog puppet and a friend of Sooty. He is portrayed to be a little dim-witted but good-natured and is often found to make mistakes that would cause problems for the other puppets. He also had an obsession with bones.

The dog-puppet Sweep would speak in a high-pitched squeak that would have some form of sentences but would be translated often by the main puppeteer for the audience to understand more clearly. This was created through the use of a saxophone reed by Harry Corbett’s brother, Leslie Corbett, and went on to become a permanent element of the character.

The second character, Soo, was designed to be a panda bear, who would be portrayed as a friendly but shy and responsible character who often acted as a motherly figure to the other two. Unlike Sooty and Sweep, Soo was created to have a voice in order to provide ease in production of television episodes.

Where is Sooty Now?

The Sooty Show is a British children’s television series, created by Harry Corbett and produced for the BBC from 1955 to 1967 and then for ITV from 1968 until 1992. According to the Guinness Book of Records it stands as one of the longest running British television programmes… 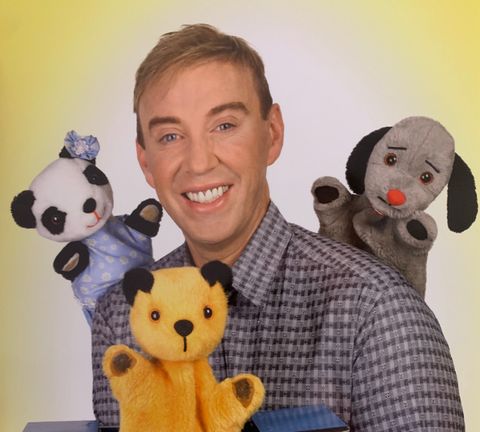 The Sooty Show is temporarily unavailable, enter your email below to be notified when they are back