Mark Lawrenson is a former Republic of Ireland international footballer. He played the defender position for Liverpool and other high-profile teams throughout the 1970s and '80s. Lawrenson sported several squad numbers whilst playing for Liverpool (most notably 5, 6 and 12) scoring 18 goals over the years. After a brief career as a manager, Mark has achieved further success as a pundit across radio, television, and the internet. He has also appeared on the BBC, TV3, BT Sport, and Today FM. Mark Lawrenson's predictions for football are a national pleasure, which he reports on his column weekly.

Mark Thomas Lawrenson was born in Preston, Lancashire, in North West England on 2 June 1957. He dreamed of being a professional footballer throughout his childhood, and his father, Tom, had played for Preston North End as a winger in the 1950s.

However, Tom Lawrenson didn't share his son's love of the sport. Mark has said that his dad only used to play to "make enough money to buy a shop, which in the end he did". He added that Tom "loved football" but that it "just wasn't the love of his life, so to speak."

Mark started playing for Preston North End in 1974, at just 17 years old. Soon after, he was awarded Preston's Player of the Year for his performance during the 1976-77 season. This set him on the path to an incredible career, during which he helped one of the biggest teams in the world make history by winning multiple consecutive league titles.

Mark Lawrenson transferred to Brighton & Hove Albion just before the 1977-78 season started. They outbid Liverpool, a side that would go on to loom large in Lawrenson's career as a Premier League footballer. He enjoyed great success at Brighton & Hove Albion for a few seasons, having played in more than 150 league games by the close of the 1980-81 season.

However, Lawrenson had to leave when the club experienced financial difficulties. Fortunately, several clubs showed interest in signing him after his outstanding performance on the pitch, but Liverpool eventually won with a £1 million deal. That made him the most expensive defender in the country.

Lawrenson's transfer to Liverpool was an integral part of Liverpool winning the Champions League. He scored his first goal for the Reds in a European Cup match against Finland's Oulun Palloseura at Liverpool's home stadium, Anfield. He was partnered with Alan Hansen, and the duo became a powerful pairing in Liverpool's central defence.

Lawrenson was off to a strong start, and it continued to grow stronger. Liverpool claimed the League Championship and the League Cup during Lawrenson's debut season with the club (1981 - 82).

Liverpool won the League Cup again in 1983, when they beat the formidable Manchester United. That year marked Liverpool's history-making win of three league cups (the 'treble'), under Joe Fagan in his first season as manager.

Liverpool also won the League Cup the following year when they snatched victory from Everton in a nail-biting clash. With this win, Liverpool became the third football club to claim three consecutive league titles in the sport's history.

They followed this up with another jaw-dropping achievement later in 1984, when they won Liverpool's fourth European Cup. The Reds wouldn't win it again until 2005. This is how Mark Lawrenson brought home five league titles (amongst other trophies) playing Liverpool's best defender.

Lawrenson played a key role in Liverpool's lineup during the 1985-86 season, when the club won the league championship and the FA Cup. That made them only the fifth team in the sport's history to claim this double win. In the FA Cup final, Liverpool went head to head with Everton for the first all-Merseyside final.

Lawrenson left Liverpool in 1988 after suffering an injury to his Achilles tendon. He'd scored an amazing 18 goals across 332 appearances for Liverpool, and was instrumental in helping them secure those crucial league cups. After, Lawrenson left England for Florida to play one season with the Tampa Bay Rowdies in 1989.

Lawrenson's Time With the Republic of Ireland National Team

Mark Lawrenson played for the Republic of Ireland national team on several occasions. He was invited to join the international side when Alan Kelly, former goalkeeper and coach at Preston, realised that Lawrenson had connections to the country through his mother.

Mark Lawrenson was just 19 when he won the first of what would become 39 international caps in 1977. In a tough match against Holland, Lawrenson scored his second goal for Ireland. He scored five goals for the Republic of Ireland team during his international career, two of which helped the side secure an unbelievable 8-0 win against Malta in a qualifier for the 1984 European Championship.

He also scored against Scotland in a qualifier for the 1988 European Championship. This enabled the team to qualify in the major football championship finals for the first time. Lawrenson played his last game for the Republic of Ireland team in 1987.

The Manager for Oxford United and Peterborough United

Mark Lawrenson followed his storming success at Liverpool with a brief managerial career. He took over as Oxford United's manager in 1988, but the club's relatively poor performance led to their relegation to the Second Division. He was replaced during the 1988-89 Second Division season. Lawrenson moved on to be the manager for Peterborough United between September 1989 and November 1990. The side won 26 games during his managerial stint.

Lawrenson stepped back onto the pitch as a footballer in the early 1990s when he joined Corby Town and Chesham United, both amateur teams. He played in the final season with Chesham United in the 1992 - 93 Isthmian League, which the team won. The four-division Isthmian League features amateur and semi-professional clubs from across East England, South East, and London. However, Lawrenson hung up his boots for good after Chesham United missed promotion to the Football Conference due to concerns over expensive repairs required at the team's ground.

Mark Lawrenson on Football Focus and Match of the Day

Football Focus is one of the biggest football programmes in England, and has been part of BBC Sport coverage since the 1970s (as part of Grandstand). It became a standalone show in 2009. Mark Lawrenson has featured on hundreds of instalments since 2001.

Lawrenson is also a frequent contributor to that other BBC Sport institutions, including Match of the Day, which was recognised as the longest-running football television programme in the world by Guinness World Records in 2015. He has performed analysis and commentary on more than 220 episodes since 1997.

Mark Lawrenson has also served as a pundit on TV3 (Ireland's first commercial channel, now Virgin Media One) for Champions League games. He appeared on TV3 many times until 2007, and Irish fans have also heard Lawrenson on Today FM's Premiership Live on many occasions.

Football video games are an essential annual purchase for fans, and Mark Lawrenson has lent his commentating skills to several titles. He made his video game debut in FIFA 2000 in 1999, along with John Motson and Gary Lineker.

Lawrenson returned as a commentator on UEFA Euro 2000 the following year, again with Motson. He can also be heard commentating on the player's skills in Pro Evolution Soccer 2008, 2009 and 2010.…

Mark Lawrenson is a former Republic of Ireland international footballer. He played the defender position for Liverpool and other high-profile teams throughout the 1970s and '80s. Lawrenson sported several squad numbers whilst playing for Liverpool (most notably 5, 6 and 12) scoring 18 goals over the… 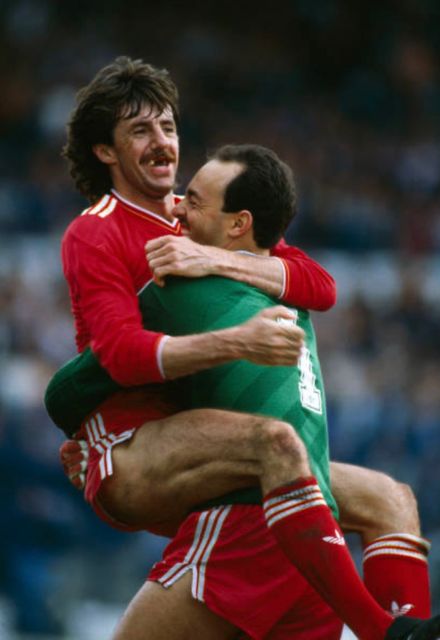